Safway helps the world get closer to the 2010 Winter Olympics in Vancouver.

For the 2010 Winter Olympics, the Safway Vancouver branch worked with two contractors: NUSSLI Special Events and Show Canada Industries,
Inc., to provide and coordinate an extensive amount of scaffold products and services.

Safway was NUSSLI’s local support for the project, which included supplying logistics, material, labour, and engineering services as required.

With scaffold erection starting in October 2009, SafLock™ System scaffold was used for a wide range of access needs, including:

Safway branches across Canada shipped equipment into Vancouver to support the Olympics’ scaffold requirements, the furthest of which came from Hamilton, Ontario.

Safway planned more than a year in advance for the Olympics project, allowing the Vancouver branch to complete the majority of the more difficult
mountain builds during the summer and fall months.

In total, more than 600 scaffolds were built, with camera towers as tall as 60 feet and pedestrian bridges ranging from 26 to 65 feet.

Safway also worked with Show Canada Industries, a special events company, to provide scaffolding for the opening and closing ceremonies, as well as the
opening ceremonies for the Paralympic Games.

More than 118,000 sq. ft. of Safway’s SafLock™ and shoring equipment, along with rental and labor services, were used for the opening and closing ceremonies, including:

The design capabilities of the project enabled Safway to outline a quality product without sacrificing our portion of the contract with NUSSLI.

By designing a common seating riser that could work with our existing SafLoad shoring equipment, Safway could complete the installation according to the very aggressive schedule in the contract without impacting our supply of SafLock™ to the 2010 games. 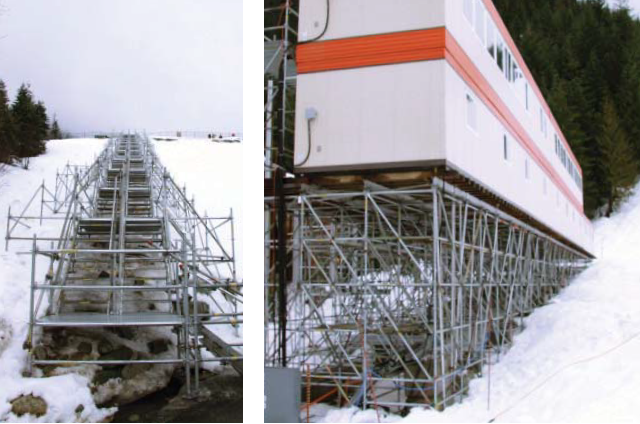 For the 2010 Winter Olympics, Safway provided services at following competition and non-competition venues: